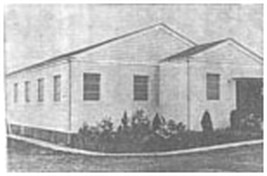 In March of 1950, a handful of people felt called by God to begin a fellowship that would make God's Word its foremost authority and outreach into the community its key priority.

God blessed their efforts in evangelism and soon homes were no longer adequate. In June of 1950, property was purchased on North Park Street. About the same time, the congregation invited Rev. John Bajema, his wife Nell and son Tom to come as their first pastor and family.
​
In those early days, reaching out and sharing the Gospel were commonplace, and the church grew rapidly. Special attention was given to young people, and Grace became one of the first churches in the area to conduct a Vacation Bible School. God was faithful, and ten years later the chapel would no longer hold everyone. Construction began on a larger basement auditorium which was completed in 1961. God continued to send new members, and in 1972, the present auditorium (which seats approximately 325 people) was finished. In 1993, a second service was added to accommodate the growing congregation.

In June of 1995 the members of Grace decided that an education wing would best suit our needs. The wing was completed in May 1997 and provided 8,500 more square feet of ministry area for classrooms, library, high school lounge, and nursery, and is a treasured addition to our facilities.
​
For over 60 years, Grace has been blessed with faithful members and friends who have stepped forward to carry the vision of reaching out to a lost world and grounding believers in the Word. Even today we feel the encouragement which comes from having such a special heritage. We are anxious to carry on in the tradition of those who have gone before us.